A visit to Welbeck Abbey, near Worksop, yesterday to do a talk on my servants’ book to accompany their new exhibition on silver and china used for dining at Welbeck and currently on display in a charming exhibition at the Harley Gallery. Lunch with the charming curator Derek Adlam and had a very enthusiastic audience who had also had Philippa Glanville and Ivan Day lecturing and they will lecture again there later in the year – highly recommended. I enjoyed picking out the excerpts from the memoirs of Frederick Gorst footman here in the early 20th century for the 6th Duke f Portland, who describes so well the extraordinary hierarchy within the servants of a house like Welbeck, separate dining and so forth. 150 servants if you include the chauffeurs (but exclude the gardeners). Gorst is very amusing about how the Duchess liked her footmen to stay trim so gave them golf clubs and bicycles and a jiu-jitsu instructor. Earlier in the week had delivered my lecture on country house theatres and private theatricals to the Art Workers Guild, introduced by Hugh Petter and the new Master, Sir Edmund Fairfax-Lucy, it is a good topic and the audience was full of brilliant observations about related things I had not even heard of . . jolly candle-light dinner in the Master’s Room afterwards. 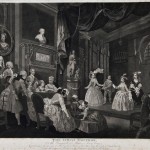 painting of a private theatrical in the early 18th century